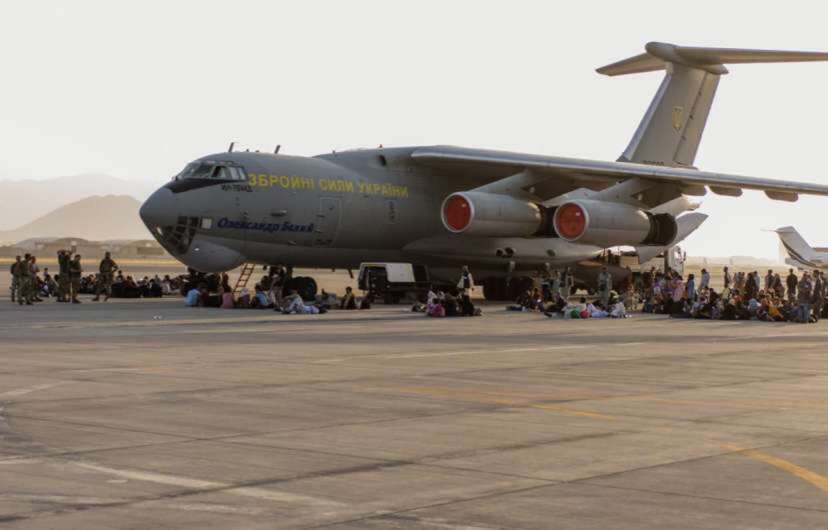 Refugees are waiting to board a U.S. plane.

On October 7, 2001, the United States army entered Afghanistan. Now, 20 years later, President Biden has officially withdrawn our troops, marking the end of America’s longest war. But what conflicts lie at the heart of this ongoing struggle, and what do these new changes mean for the citizens of Afghanistan?
Currently, the Taliban, a group of Islamic extremists who have held power in Afghanistan multiple times in recent history, have once again seized control of the country after signing a deal with both former President Trump and President Biden to negotiate the U.S.’s terms of withdrawal. According to these agreements, the United States is allowed to evacuate their own personnel in peace. As the deadline to do this approaches, however, the Taliban have begun to overrun cities. Meanwhile, tens of thousands of Afghan refugees are attempting to flee the country in hopes of escaping the notoriously oppressive and violent rule of their new leaders.
Nico Pusateri, 23, has been serving in the U.S. Army for almost five years. He currently attends college in St. Cloud, Minn. In March, Pusateri was deployed to areas of the Middle East, and ended up in Afghanistan in early August. During his interview on September 12, he was stationed in Kuwait, with four months left on his deployment before returning home.
“The training that we get is really good, but they don’t really train you how to kind of handle the unknown[…] and that really frightened me,” Pusateri says.
As a member of the ground troops, Pusateri’s primary duty was to establish and enforce security. Pusateri and his fellow servicemen had to stop groups of 300-400 people disguised as Afghan citizens from trying to climb over three layer deep walls. In one of these moments of chaos, members of the Taliban arrived in trucks, causing interpreters to shout across the barren sand and barbed wire fences in attempts to communicate.
“[The Taliban] started shooting at spaces, really close between people, and they cleared that whole thing out,” Pusateri says. U.S. soldiers ended up gingerly stepping foot into the barren areas, hands away from their weapons in order to remain at peace with the Taliban, who smiled and attempted to fist bump the soldiers, instilling a feeling of uneasiness in the room. Now that the war is coming to a close, at least for U.S. soldiers, these situations of fear and uncertainty will likely shrink. ForAfghan citizens, however, the outcomes are far hazier.
Some citizens have set their sights on America, and thanks to efforts by the U.S. Airforce, their dreams are becoming a reality.
“We got over 50,000 people out in the three weeks that we were there. 11,000 we got out in one day […] I could just hear planes landing, taking off, and touching down almost constantly throughout the entire day,” Pusateri says.
Pusateri recalls being able to get to know some of the refugees before they boarded these aircrafts.
“I actually had the extreme privilege to talk to a young 16 year old kid on the very first day I got to Afghanistan,” he states.
Pusateri conversed with the families of many young Afghans about their plans for the future. He and his fellow soldiers played games with the children while passing around snacks, gum, and toys. He carried cigarettes in his pocket to give to the Afghans who smoked them, but could not always get them. As more and more refugees fled the changing scene, Pusateri described the villages as ghost towns. At first, he was confused.
“Then I realized they got on a plane and they made it out, which was super great,” he says.
Although these departing planes may serve as a beacon of hope for current Afghan immigrants, there are still many resources that are needed in order for them to build new lives and futures in the United States. After speaking to many refugees about their aspirations, Pusateri felt his ideas on immigration concerns shifting.
“The most important resource that we have to offer them is our companionship,” he says. “[There are] ways that you can donate, not only money to nonprofit organizations, but things like backpacks and non-perishables,” Pusateri says. Some organizations to donate to include the Salvation Army, and Welcome.us. More information for Wisconsin locations can be found through this QR code.
As a service member, Pusateri reflects on the impact he was able to make during his deployment.
“It’s just been amazing,” he says. “The places that I’ve gotten to see […] the impact that I’ve gotten to have on so many different people’s lives, especially in Afghanistan.”
He speaks fondly of the opportunities and wisdom he gained from his time in the military.
“You learn so many life experiences and so many different skills,” Pusateri says. “You get to go see the world for the good and the bad, and it really is an eye opening experience.”