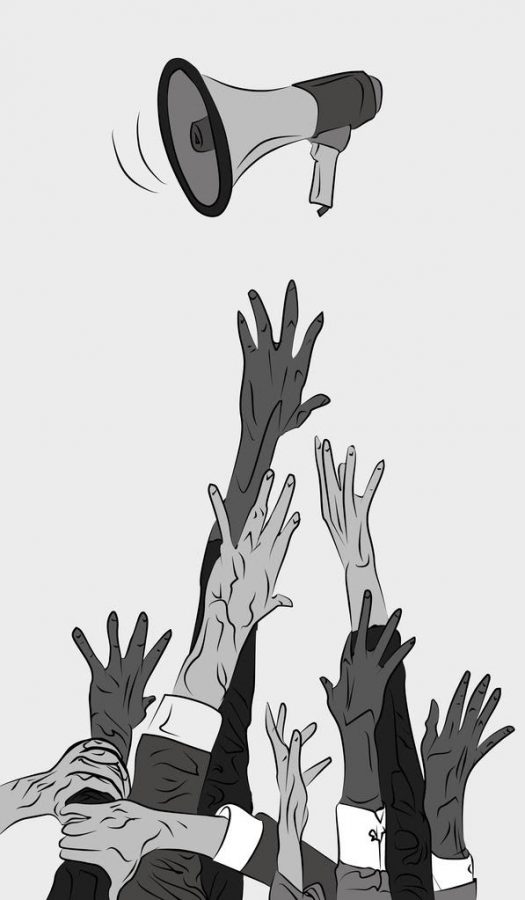 While we, as a country, have undoubtedly come a long way since the birth of our democracy, we are far from a nation without hatred. The legacy of slavery is ingrained in the foundation that our justice system, educational system, and social classes are built off of.

“The idea of slavery and keeping people at a limited level is still very much in existence. If you look at where wealth is spread out across the country, it’s still very limited. The system in reality isn’t failing anybody; the system is doing exactly what it was designed to do. If we look at it from that lens, the system works,” says Joshua Thomas, Multicultural Literature and LA 10 & 11 teacher.

This system continues to thrive with the development and popularization of social media over recent decades; it provides a platform of self-expression for anyone with internet access. These platforms provide  common ground for individuals to come together, socialize, and influence each other’s beliefs and opinions.

From the local level of Stoughton’s neighborhood Facebook groups, to nationwide reignition of BLM, to the riots of Jan. 6, social media is both a resource… and a weapon.

Social media acts as a magnet, bringing like-minded people together in a closed-off virtual community; a sanctuary for both compassion and censure.

Oftentimes, the anonymity of social media allows its users to abuse their platform. The power behind a string of Tweets, a Facebook post, a Tiktok, fuels the discrepancy of deciphering fact from fiction.

When discussing the reach of influence social media has from powerful groups in our society, Mia Croyle, SASD Board of Education Member, says, “[Social media provides] this great potential to connect people across geographic boundaries. The dark side of that is the neo-nazis coming together to make plans and grow their numbers, but the bright side of that is the groups at the other end of the spectrum coming together and offering support.”

It’s easy to find information regarding the white supremacist groups like the KKK, neo-nazis, and the Proud Boys – all it takes is a few clicks around any social media site. Such easy access and expression exposes adult and adolescent users alike to varying kinds of hate speech.

The riots of Jan. 6 revealed the identity of the true gatekeepers of information–social media platforms.  It’s on these platforms where the lines between exercising a constitutional right and preventing uprisings in our society become blurry: when is censorship truly necessary in a growing polarized and virtual world?

The First Amendment recognizes and preserves the voice of groups on opposite ends of the political spectrum. However, this right only grants the ability to openly discuss beliefs and ideas. It does not protect incitement of violence.

“We have, in our society right now, a huge problem with the lack of ability or means to discern fact from fiction. People assume that if they read it on Facebook or hear it on the radio [that] someone said it and it must be true. There’s a bit of a lack of awareness, a lack of transparency, in how that all happens. [.

..] Free speech is necessary for a functioning democracy. What we have going right now in terms of communication and free speech isn’t helping our democracy function any better, ” Croyle says.

However, Croyle goes on to say that the censorship of extremist groups and their beliefs isn’t necessarily the solution.

“If we overcorrect and don’t allow anywhere for people to share these questions/concerns/thoughts/etc., then we risk that the whole thing just goes underground. It won’t go away–the only way to the other side of this is through it,” Croyle says.

An article published in 2018 on wired.com elaborates on the struggles of censoring white supremacist groups.

“In fact, going underground is a return to the status quo for American white supremacy. For decades, leaders like David Duke have been instructing their followers to blend into polite society, and then occasionally make oblique calls for lone-wolf terrorist actors. It’s that kind of individual and small-cell violence that’s on the rise in 2018 […].”

In the Stoughton district alone, the lack of diversity reveals the legacy of systemic racism that’s ingrain

ed in the American educational system. As unintentional as this legacy may seem, young students have experienced the tampering effects of racism.

Croyle, who has two children of color in the district, explains the challenge of persistent exposure to hate speech in our society from experience with her own son.

“When my son was in first or second grade, he came home upset one day because they were learning about a black artist and watched a video [on him]. One of his classmates said ‘my daddy says we shouldn’t listen to black people because they’re all dumb’. Should my son, the only black student in the classroom, be exposed to hearing that? I don’t really think so,” Croyle says.

Even before social media, white supremacist groups thrived throughout our history. Although the effects of white supremacy look different, it’s still here in our community, our classrooms, in the way we teach American history.

Nelson provides more insight into our education of slavery and white supremacy.

In the current climate of social justice, Nelson goes on to say that there is an importance behind educating the future leaders of the American democracy of the whole American history without sugar coating it.

“We are more diverse now than we have been, at least since the 60s. […]. Even in popular entertainment, we’ve seen an increased awareness of the value of people of color [in movies or entertainment]. I do think it’s more difficult for people of color to break through those barriers, even if they seem more welcoming than others. We need to recognize that the barriers are there,” Nelson says.

“Many people refuse to acknowledge that other people, especially people of color, start further behind on the starting line than where they do. The reason they don’t want to recognize it is because once you recognize the problem, you have to deal with it,” Nelson says.

According to Croyle, this is why censoring white supremacy becomes problematic: people don’t see (or choose to acknowledge) the issues of racism, white supremacy, and the deep-rooted thoughts/actions that fuel them, making it far easier to simply ignore the issues instead of addressing them.

Social media is a pick and choose kind of world. It’s effortlessly easy; we can avoid the information that makes us uncomfortable– we can pretend it doesn’t exist because it’s not in our feed. However, our avoidance of discomfort prevents us from absorbing the information that paints a fuller, more complete picture of the world.

“I very carefully curate my friends list because I don’t want something that is disturbing or upsetting to me to show up to my feed. I intentionally seek out online newspapers from different ends of the political spectrum because I want to hear the perspectives of others. I just don’t want to hear that from people’s Facebook posts. That takes effort–that takes work–to find media sources that you don’t necessarily align with,” Croyle says.

“My belief is that white people need to deal with the white supremacists–that’s not a problem that Black people have to deal with […] What I mean by [this] is that white supremacy–and all other manifestations of racism–are a problem created and perpetuated by, for, and of white people. There is nothing that Black people did to cause racism, and there is nothing they can do to cure it” ”

This sentiment is mirrored by both Nelson and Thomas, who discuss that the key to erasing hate begins with understanding it; learning the un-sugar coated version of history is a step in explaining the progression our society currently has. This understanding, whether it’s missing pieces or not, determines what direction the American democracy takes.

Keli Melcher, Director of Student Services in the Stoughton Area School District, is working on anti-racism initiatives within our district. Melcher helps organize race discussion groups and has been working intensely on this project since 2018.

“Right now, we’re targeting staff [with the program], but I do have a student advisory to get student voice into the discussion…We talked a lot about student voice from hearing personal experiences from our Black students, of our Latinx students, of LGBTQ students,” Melcher says.

Eradicating the hatred in our society is no easy task, for members of the KKK and neo-Nazi groups cling tightly to their beliefs.

“[…] When we’re white, we have a hard time talking about race and we have different reactions to it. We’re trying to encompass all of our racial identity and what kind of biases we hold because we’re white and because we’ve been racialized in a system that was built on white supremacy culture,” Melcher says.

In order to continue moving forward, we have to focus on what’s holding us back.

Melcher discusses her own process of self reflection.

“[I’ve been] becoming more self aware of where I’m at with my racial identity and starting to understand different people’s stories–our Black population, our Latinx population, our indigenous [population]–they have different stories that we need to hear,” Melcher says.

So far, the race discussions amongst staff have created a new sense of trust to talk about race. Staff are able to interact with one another in “restorative circles”–a safe space to openly discuss and rely on one another throughout the process.

Currently, the staff are beginning to watch the Netflix movie, 13th. The next step is to design the professional development so that staff can better engage with students in this learning.

The process seems long, but racism is something deeply rooted within our history; our society functions on the very means of putting others behind us.

“What I want to see is progress – the consistent, genuine effort to make things right. That’s what this is all about–it’s for leading a better planet for you guys, for your generation, than the one you inherited,” Thomas says.

Thus, Melcher and Thomas believe this is a necessary journey. Supremacist ideals aren’t rooted in the obvious acts of violence we’ve seen from the KKK and the Proud Boys; they’re built within the foundation of our nation.

The American democracy is like a game of Jenga–there is a fine balance between too much voice and not enough of it. This fight for balance is in our history, our American history. Rather than hiding from it, it’s our duty to acknowledge it, accept it, and grow from it. It’s how we express our voice, how we listen to others, and the action we take from it that defines the strength of our democracy.

After all, we are a nation built off of more than just one voice–so which voice will you choose to follow?